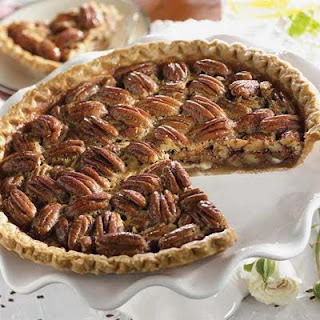 The following is a repeat story and recipe I published in the Carlsbad Current-Argus back in 2000 when we first moved to New Mexico. To our surprise, there were pecan trees everywhere, and when the pecans started falling off the trees in early to mid-November, the holiday season officially opened.

We learned two things that first November in the desert; one was the discovery of Tracy Cothern’s OMG Southern Pecan Pie. Secondly, we had to figure out a way to curtail our dog’s intake of pecans…he was getting a “pecan roll” that wasn’t too sweet!

Last summer my husband and I adopted Leon, a 1-year old Dachshund puppy. Dachshunds were originally trained in Europe for hunting badgers. I’m not sure why the Dachshund was chosen to hunt the nasty tempered badger, but I think being low to the ground might have given the breed a definite advantage over longer-legged canine.

Fortunately the Dachshund has evolved into a sought after and affectionate house pet. The fierce killer instinct has dissipated from the breed, but I think the hunter instinct remains. At least that’s the case with our dog, Leon, who is formidable when he commits to the task of hunting pecans.

My husband and I are transplants from the Pacific Northwest and it wasn’t until recently that we learned how prolific pecans are in the Southwest. In fact, we didn’t know we had pecan trees in our backyard until after Leon came to live with us. Pecan shells began mysteriously appearing on the living room rug, under the bed, crushed near Leon’s doggie door, under the wisteria bush and behind the built-in barbeque grill.

I’m proud of our native Southwesterner and he definitely earns his keep as our Number One Pecan Hunter. He successfully finds the most elusive nuts that have fallen from the trees and nuzzled their way deep into the grass. He deserves much of the credit for our yearly storehouse of pecans, helping us to find enough to share with our out-of-state friends and family.

No too long ago we took Leon to the vet for a routine check-up. The vet looked Leon over and reported, “Leon is in excellent health, except it seems he’s gained 3 pounds in less than 6 months.”

Ed and I looked at each other and laughed. “Having to watch our weight seems to run in the Briggs’ family. Is Leon going to have to join us on our weight loss program?” I asked the vet.

The vet was clearly amused. He smiled and said, “Leon is going to have to cut back on his dessert and my guess is that he considers pecans dessert!” The vet patted Leon’s head and ran his hand across Leon’s back, “Look at his coat, it glistens, that’s how I can tell you folks have pecan trees. Leon is getting fat from eating too many pecans!”

“Yes, we have pecan trees. In fact, Leon hides them all over the house and buries them in the backyard so he can grab a quick treat when he has a snack attack. We didn’t realize he’s been eating enough to gain weight!” Ed replied.

On the veterinarian’s advice we’ve started taking our furry little-round pound for more walks, and we’ve replaced his pecan treats with low-fat alternatives, such as raw carrots and zucchini. At times it’s challenging to beat the veteran pecan hunter to the freshly fallen nuts, but it’s helped to confiscate Leon’s stash when we discover pecans he’s buried in the flowerbed or hidden under the blanket in his bed.

Under careful supervision, Leon still helps us gather pecans when I get the notion to bake a pecan dessert. So, when we sink our teeth into a luscious piece of “OMG! Southern Pecan Pie” it only seems fair that we slip Leon a few sweet morsels as his reward for a hunt well done!

Piecrust: Prepare a single piecrust for one 9” pie or purchase a ready-made crust.

Baking tip: It’s often challenging to get a custard style pie cooked through to the center without the crust getting too brown. For better results try pre-baking bottom crusts to get a jump-start on a thoroughly baked pie.

Preheat oven to 350°. Bake single-crust pie shell (without any filling) for 5-7 minutes. Allow the crust to cool completely before adding filling, then add filling and bake as directed. Keep in mind the pie might be done a few minutes earlier when the crust is pre-baked. This method can be used for custard and custard style pies like pumpkin and pecan where eggs can be an issue.

This recipe has been passed down through three generations and it comes from the kitchen of Tracy Cothern, Carlsbad, New Mexico.

This entry was posted in Desserts. Bookmark the permalink.
Logging In...