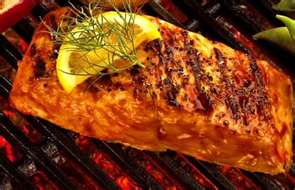 My dad, R. D. Belles, was bitten by the salmon bug when he was a young man in his early 30s. We’d know he was experiencing a flare-up of what we called “Salmon Fever” when his sleeping and eating patterns took a sudden turn.

Normally, Dad moaned at the buzz of an alarm clock and slept in until noon whenever he got the chance, and routinely he began every day with the hardiest of breakfasts. But when he pointed the truck and boat trailer toward his favorite fishing haunts out on the tip of the Olympic Peninsula in WashingtonState, R.D.’s usual sleeping and eating patterns became drastically altered.

During such flareups he’d spring out of bed at 3:30 AM. “No time for breakfast. I have to get out there and wake up those Kings!” he’d whisper slipping out of the cabin like a cat on a late-night prowl.

Well after dark we’d see the running lights of his boat, Bob-Bet, bumping against the dock. R.D.’s broad smile glinting through the darkness told us his catch for the day was abundant. With stubble sprouting from his chin, he’d flop into a chair at the kitchen table and say, “I’m as hungry as a bear coming out of hibernation!” He’d plan the next day’s outing over a platter full of pan-fried red potatoes and his catch of “shaker fish.”

Dad took fishing far more serious than anyone else in the family. Once, while fishing with him, I became severely seasick and begged to go back to shore. Foreboding walls of water rocked the twenty six-foot craft back and forth among the powerful waves. Bob-Bet lifted WAY UP and then plunged WAY DOWN, between the rollers. R.D. patiently puffed on his pipe and said, “Oh, you’ll be okay, you’ve just had too much motion today.” Sundown was the only good excuse for Dad to return to shore.

Once, I asked Dad if he’d bring back a dogfish (which is a small shark) for me to fry up for dinner.I’d heard dogfish had a unique texture partnered with a surprisingly non-fishy flavor. He hit the ceiling.“I won’t have the damn stink’n things in my boat.You can’t kill em’- even with a club! If you can’t kill em’ then ya can’t eat em’!” He blasted at me.

My Uncle Ken, also curious about the feasibility of dogfish & chips for dinner, brought me a large, fresh dogfish the next time he went fishing with Dad. Dad was furious with his older brother and acted like he was a traitor to the Salmon Fishing Hall of Fame.

I barbecued a small Coho salmon for Dad and deep-fried the dogfish for my adventurous guests. Dad showed up for dinner, but it was the first vegetarian meal that I’d ever known him to eat. He never ate fish at my house again! By the way, the dogfish was delicious!

In September and October my thoughts turn to my father who probably fished every salmon bed that exists in Pacific Northwest waters. His passion to catch the mighty fish made it possible for salmon to be served frequently in our home. My mother prepared it many, many different ways, and through the years I’ve gathered some of my own renditions of how to cook the fish that “puts up one hell of a fight before he lands in the boat.” I’d like to share one way of cooking salmon that’ll make you glad the king of fish ”landed” on your dinner plate. Enjoy!

Preheat either an outdoor drill or an indoor grated griddle to medium-high heat. Lightly oil grate with a brush or paper towel. Remove salmon from the marinade; shake off excess marinade and discard any excess marinade. Grill salmon until browned and fish easily flakes, about 5 to 7 minutes on each side. Serve with jasmine rice.